Home » About Us » Breeds » Anglo Nubian

The main identifying feature of this breed is the head, which has a pronounced “roman” nose and long drooping ears. The goat has a long deep body and an upright stance. The large number of colour variations, in the short silky coat, adds to the breeds’ attractions.

An average 24 hours yield of 3.89 Kg. at 4.84% butterfat and 3.51% protein was obtained by considering data from all Anglo Nubians entered in B.G.S. recognised milking trials in a recent year (467 performances). The milk is ideal for yoghurt and cheese making. 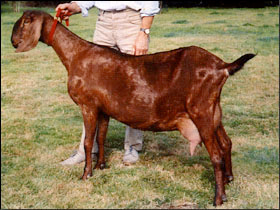 The breed is also well suited to meat production, both in its own right and when crossed with other breeds. It adapts well to hot climates and has resulted in demand for exports to increase both milk and meat production.
See the Official Anglo-Nubian Breed Society website:
www.anglonubian.org.uk