Home » About Us » Breeds » Harness 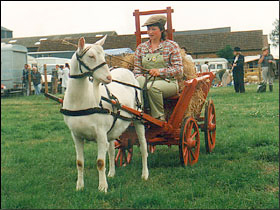 Ever since the goat was domesticated it has been used as a beast of burden. In the Roman times children used to mimic their elders and raced each other in miniature chariots.

Even now in some countries they are being used to carry loads, small children, wood for burning, their uses never end. From Victorian times until the start of World War 2 in England, the goat and its chaise was a popular sight around the seaside towns especially on the South and East Coasts. Used for the half penny ride and also as a photographers tool, unfortunately the goat and the donkey were much abused.

The Harness Goat Society was formed in 1986 to encourage the use of a working goat, pack or driven and to make sure no cruelty was involved. 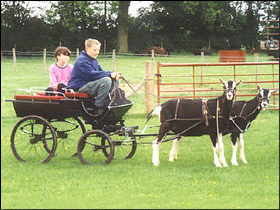 All breeds of goat of either sex can be trained, but the Society recommends a disbudded or polled castrated male as being the most suitable.

More information and pictures on the HGS website: www.harnessgoats.co.uk

Further information from the secretary: