Home » About Us » Breeds » Toggenburg 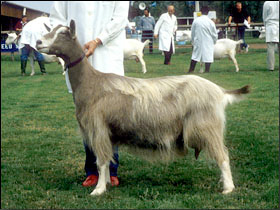 This is a breed originating in Switzerland within an area centred on the Obertoggenburg and Werdenburg valleys, with goats reaching the UK from 1882 onwards. The Toggenburg section of the B.G.S. Herd Book was opened in 1905, the first breed to have its own section. There were importations of goats from Switzerland in 1922, 1965 and semen in 1993. 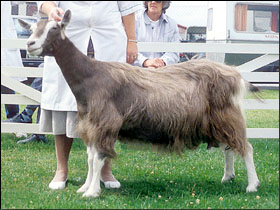 The goat has good length and depth, without legginess. Although smaller in stature than its British counterpart it is usually a strong goat with sound conformation. Its colour can range from mid-brown to shades of grey or fawn, with white Swiss markings. The head is distinctive, being wide across the level of the eyes, and having a dished face. The hair can be any length, but fringing is usually present to some degree and the coat is silky in texture.

An average 24 hours yield of 3.61 Kg. at 3.70% butterfat and 2.71% protein was obtained by considering data from all Toggenburg goats entered in B.G.S. recognised milking trials in a recent year (195 performances).
Web site: http://toggenburgbreederssociety.yolasite.com