Caprine arthritis encephalitis is a viral disease of goats that can be detected by a blood test that demonstrates antibody presence. The eventual clinical effects of the disease are devastating on both animal welfare and economical grounds. Infection can also however be relatively mild and easily missed, particularly in the early stages. 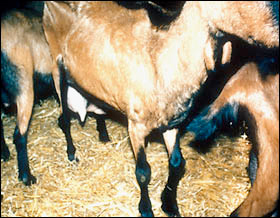 It is essential to keep your goats clear of the virus. The upper image shows a French Chamoisée milker showing some advanced signs of CAE.

These are acute loss of condition, painful knee joint arthritis and an indurative mastitis. The lower image shows a French Chamoisée with extremely misshapen udder and, though difficult to appreciate on a photograph, an udder that was as hard as wood. The udders on these animals did not feel as if they belong to a living thing. 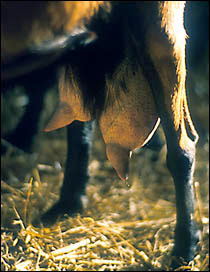 It is important not to underestimate the disease and the economic cost it could have on your herd’s production of either milk or fibre. Once a goat is infected it remains so for life. The virus can hide within its host going undetected. The reason for this being that the antibody in the blood can fluctuate, which can mean that infected goats may not test positive. This is why regular blood tests must be carried out to keep out the disease the virus can cause. There may be no swollen knees, no lung infection and no hard, wooden, udders until you find your herd with these very visible symptoms of the disease and in an almost impossible position, just like some of the French goat farmers did in the late 80’s when it was found that in some instances they had an infection rate of 100%, and with no alternative but to cull hard, which reduced the average age of the herd to 2.5 years old.

How is the CAE virus spread?

Colostrum and Milk – The highest risk comes from colostrum and milk. The practise of feeding pooled milk and colostrum to kids has been shown to be a major vehicle for the fast and widespread transmission of infection in herds where infected does are present, the problem being that you may not know if any animals are infected. It is considered that even in a bucket that has previously contained infected milk and not washed out thoroughly that this may be sufficient to spread the virus.

Mating – Infection can be transmitted at mating although it is said that the male is more likely to be infected by the female. However, it would not be worth the risk of using a male of unknown health status.

Lateral Transmission – In trials it has been shown that transmission of the virus has occurred when goats have been kept in close contact over a period of time.

Blood – This would seem to be of a lower risk route of infection than milk. Tattooing ears, injections and taking blood samples are all potential sources of blood transfer between goats unless precautions are taken to prevent it.

How do I have my goats tested for CAEV?

Make an appointment with your Vet to take blood samples for CAEV. For your records, for showing, and to join the BGS Monitored Herd you must use the BGS Blood submission forms. These can be downloaded before hand so that you can have the parts, which you should fill in prior to your vet’s visit, completed, saving you and your vet time and hopefully your money.

All goats must be identified individually with a permanent mark, such as a tattoo earmark as required by the BGS for registration. 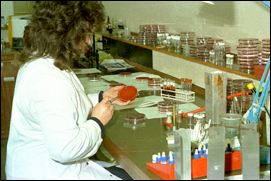 How often should I test my herd for CAEV?

Every year is the ideal, but a risk assessment of possible exposure and transmission of the disease should be considered. Even when risks are minimised, alternate years should be the maximum interval.

What is the level of infection for CAEV in the UK?

Very low – less than 3% of all goats tested*. Due exclusively to self imposed controls and self-regulating measures introduced by British goat keepers to avoid the spread of infection without any government aid or EEC grants. The British Goat Society and its members have been foremost in waging war on the CAE virus and continue to do so today.