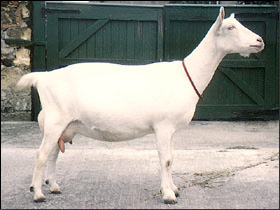 This is a white goat, which gets its name from the Saanen valley in Switzerland, where selective breeding of dairy goats has taken place for several hundred years. 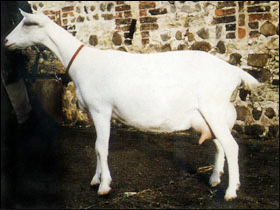 Saanens in the UK, according to the British Goat Society Breed Standards, should have “good length and depth, without legginess”. The goats have a short fine coat and supple skin and a distinctly feminine head, which may be straight or dished. There are relatively few Saanens in the UK, but they have a quiet nature, can milk well and have qualities used with great advantage in improving British Saanens.

An average 24 hours yield of 4.29 Kg. at 3.58% butterfat and 2.66% protein was obtained by considering data from all Saanen goats entered in B.G.S. recognised milking trials in a recent year (205 performances).