Home » About Us » Breeds » British Saanen 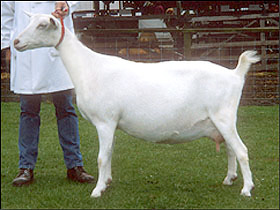 This is a white goat, developed in the UK and largely influenced by imported Saanen goats. The white coat is short and fine, but freckles and patches of colour are allowed on the skin. Registered pure bred Saanens can be used with British Saanens and the progeny can still be registered as British Saanen. Goats of this breed have longer legs than the Saanen, and are heavier. Generally they have calm natures with high yields and long lactations. 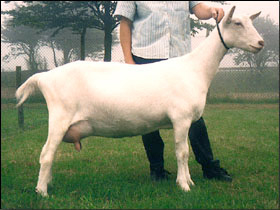 It is a popular breed for those requiring high production of liquid milk throughout the year and where large groups of goats may be housed together. For these reasons the British Saanen forms the foundation breeding stock for some large goat farms in the UK, where liquid milk sales are the main objective.

An average 24 hour yield of 5.17 Kg. at 3.48% butterfat and 2.61% protein was obtained by considering data from all British Saanens entered in B.G.S. recognised milking trials in a recent year (545 performances).